In Stick Fight: The Game, four stick figures are involved where they have to fight to make their survival and to kill their opponents. They need to grab the variety of weapons falling from the sky and have to use in the battle against the opponents. But, many players do not know how to make the most of any weapons they grab.

How effectively you use the weapon you have surely plays a great role in helping you in changing the entire game. This guide will help you to learn how to make better use of weapons in this gameplay.

Get Stick Fight The Game for PC (Windows) and Mac

Pistols are small guns having certain ammo and modest fire rate. The best pistol in the game is God Pistol, but Uzi is somewhat more common than it.

The strategy to use a pistol in a better way is to target closely and fire. You should never spam the pistol, it is so because when you shoot pistol everywhere, the chances of breaking something that can kill you increase. When you see that opponent is rushing you, shoot him immediately until he reaches you, after that click F to throw the weapon.

Rifles are one of the perfect weapons in Stick Fight: The Game which has a fast fire rate and is capable of doing moderate damage to the opponent. There are three different types of Rifles; each has its abilities and benefits. 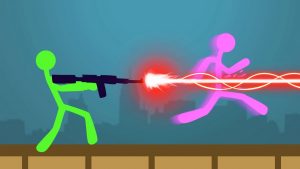 Like Rifles, Explosive Guns are also of three types.

Snakes are taken as the annoying weapons in Stick Fight: The Game. It consists of snake guns that shoot flying snakes that can follow anybody even the shooter itself and attack them. The best way is to use snake guns to shoot your opponent far away. It is recommended to avoid this weapon unless it is the only choice remaining for you.

Lava is another overpowered weapon which is used in different ways.

Apart from these weapons, Stick Fight: The Game has a variety of other weapons as well, such as spike gun, sword, spear, ice gun, black hole gun and many more.